iNet is proud to have recently received the Employer Support of The Guard and Reserve (ESGR) Patriot Award, reflecting efforts made to support employees in service through a wide-range of measures, including flexible schedules, time off prior to and after deployment, caring for families, and granting leaves of absence if needed. ESGR volunteers presented the award to iNet CEO Mark Slaughter, who also signed the ESGR Statement of Support, confirming iNet’s commitment to recognizing and honoring the Uniformed Services Employment and Reemployment Rights Act, and providing our managers and supervisors with the tools they need to effectively manage employees who serve in the Guard and Reserve.

iNet was nominated for the honor by former Director of Marketing Allegra Taylor, a member of the Army National Guard who recently completed a lengthy deployment while employed by iNet. Allegra has since left the company to pursue further education. Representing iNet’s military staff members was Vice-President of Customer Operations and Master Sergeant Eric Schuele, an 8-year Air Force Active Duty veteran, with 16 years and counting in the Air National Guard. 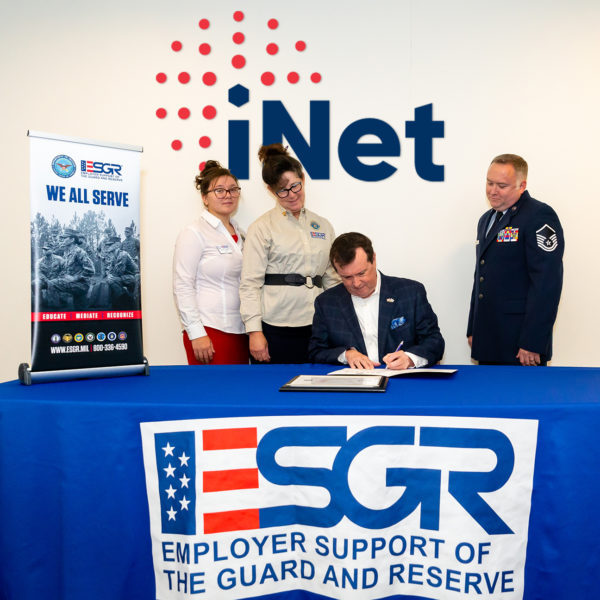 Partnership offers faster, more efficient cloud connectivity. Employing Megaport’s Virtual Cross Connects (VXCs), iNet provides private, flexible, and on-demand connections between any of the locations on the Megaport network in a point-and-click manner. Not only can iNet’s customers connect directly to cloud service providers such as AWS, Microsoft Azure, and Google Cloud, they can also...

We’re remote communications experts.
So you don’t have to be.